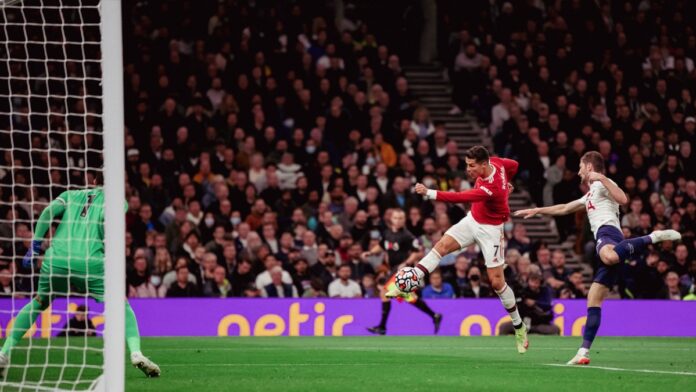 Cristiano Ronaldo, Edinson Cavani, and Marcus Rashford scored to give Manchester United an important win over Tottenham Hotspur in London, putting the critics to rest for the time being.

Following their shocking 5-0 loss to Liverpool last week, Ole Gunnar Solskjr opted for five at the back, while both Cristiano Ronaldo and Edinson Cavani started upfront, hoping to take advantage of Manchester United’s obvious game plan of sitting deep and hitting Spurs on the counter-attack.

The hosts, however, failed to capitalize on this, allowing United to play out from the back with little pressure.

The first big chance came after 23 minutes, and it fell to Tottenham’s Son Heung-min, who could only blast his shot over from close range.

Tottenham thought they had taken the lead when Cristian Romero turned the ball in at the back post, but it was quickly ruled out for offside.

United then punished the ‘Lilywhites’ for failing to make their dominance count when Bruno Fernandes’ wonderful pass found Ronaldo at the back post, who sensationally volleyed the ball across Lloris to give United a 1-0 lead at halftime.

Soon after the restart, Ronaldo was in again, furiously smashing the ball home, but for the second time this game, a goal was ruled out for offside.

Just after the hour mark, United doubled their lead when Ronaldo turned provider, putting Cavani through to exquisitely dink the ball over the onrushing Hugo Lloris to make it 2-0.

Tottenham looked stunned after another world-class finish had undone them, and they were unable to respond with any clear-cut chances.

Marcus Rashford broke through the Spurs defense five minutes from time to easily slot the ball into the bottom corner, giving Ole a much-needed victory before they travel to Bergamo on Tuesday to face Atalanta in the UEFA Champions League.

Nuno is under a lot of pressure now after losing three games in a row without scoring a single goal.