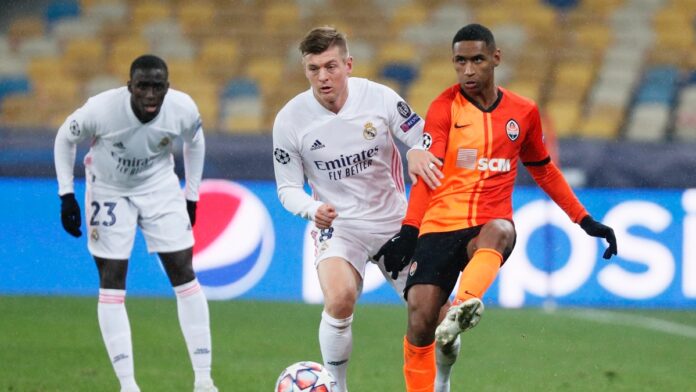 Shakhtar Donetsk is rooted to the bottom of Group D after a disastrous start to their UEFA Champions League (UCL) campaign, and a win over Real Madrid may be required if they are to advance to the last-16 for the first time since 2017/18.

Shakhtar will need to do something they haven’t done in their last three UCL games if they are to claim a much-needed victory (D2, L1).

The 13-time Ukrainian Premier League champions are no strangers to the Spanish giants, having won the UCL double over ‘Los Blancos’ last season.

Despite their recent success against Real, Shakhtar have only won seven of their 27 European games against Spanish opposition (D6, L14), and they are currently in the midst of a terrible run in which they have only won four of their last 21 UCL games (D9, L8).

Real Madrid are in their 52nd European Cup campaign, the most of any team, but they are three points behind the leaders in Group D after being stunned by Sheriff Tiraspol at the Santiago Bernabéu last time out.

Real, on the other hand, has a history of bouncing back from defeat, having not lost back-to-back group stage games in the same season since 2008.

Real Madrid’s recent visits to Eastern Europe have not been fruitful, with only two victories on Ukrainian soil in their last seven visits (D4, L1).

Carlo Ancelotti’s side, on the other hand, can take heart from the fact that they have won six of their last 12 UCL away games (D2, L4), as well as scoring 19 goals in their last seven meetings with Ukraine-based clubs.

Match Facts
Shakhtar has scored at least two goals in each of their last three matches against Real Madrid in all competitions.

Prediction
Shakhtar are unbeaten in six games after a 2-0 loss to FC Sheriff last month. This season, they have only lost once at home in all competitions.

Real Madrid’s match against Athletic Club was postponed, giving Los Blancos more time to prepare for their trip to Ukraine. However, they come into this game in poor form, having lost their last two games to FC Sheriff and Espanyol.

Given the home team’s recent form, as well as Real Madrid’s struggles in terms of results and absenteeism, it wouldn’t be a surprise if Shakhtar won this one.