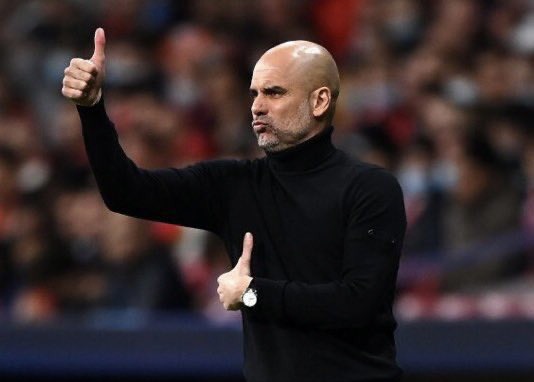 Manchester City’s Pep Guardiola has reached his ninth Champions League semi-final, the most of any manager in the history of the competition (four with Barcelona, three with Bayern Munich, two with City).

Pep Guardiola’s team came to the Wanda Metropolitano with a 1-0 advantage from the first leg, and the atmosphere in Madrid was tense throughout as they attempted to end the tie.

Atletico Madrid held the game tight in the first half before ramping up the pressure after the interval, with Antoine Griezmann and Rodrigo De Paul both coming close to scoring.

But the home side couldn’t get the goal they needed to tie the game up on aggregate, and Felipe was sent off for a second yellow card in stoppage time. In an unpleasant finish, Atletico Madrid used 12 minutes of stoppage time to hunt for a fight at every opportunity.

Atletico pressed higher up the pitch from the start than they did at the Etihad a week ago, while the brutal treatment remained the same. Phil Foden appeared to be the target in Madrid, and he had to be bandaged up right away when Felipe clattered him in the air and injured the back of his skull.

Felipe escaped a yellow card at the time, but he received one soon after when he went in late from behind on Kevin De Bruyne. That didn’t discourage the defender, who came dangerously close to handing the referee a difficult choice on a couple of times.

Rodrigo De Paul was brought as part of a triple change with 20 minutes remaining and nearly made a significant impact within seconds. Marcos Llorente returned the ball to him, but his whipped effort couldn’t disturb Ederson. Late in the game, Luis Suarez came off the bench to get his chance as Atletico poured on the pressure in pursuit of a goal that would have taken the match to extra time.

John Stones’ outstanding stop put the home side at bay just as Matheus Cunha thought he had leveled the score on aggregate with a thunderous close-range strike.

After that, Yannick Carrasco’s cut-back almost reached Luis Suarez in the box. City will return to Madrid soon, but this time to the Bernabeu rather than the Wanda Metropolitano.