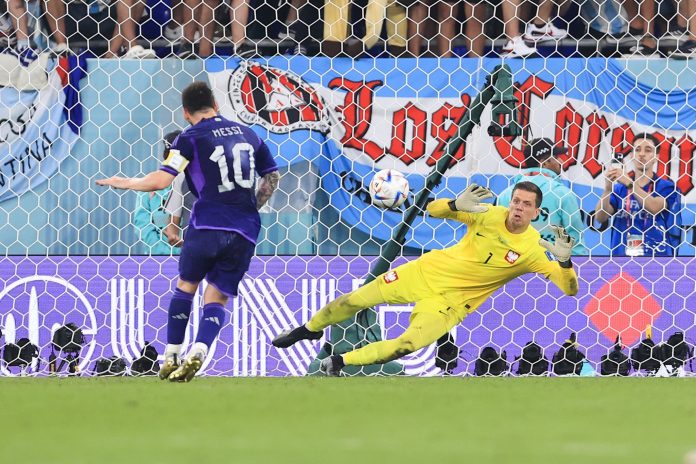 Even though Argentina’s first game against Saudi Arabia was one of the biggest upsets in World Cup history, Lionel Scaloni’s team cruised to a 2-0 win over Poland and into the round of 16.

Lionel Messi had scored in each of his last six games for Argentina, but he missed a chance to make it seven goals in a row for the Albiceleste in a very exciting first half.

With the hopes of a whole country on his shoulders, the seven-time Ballon d’Or winner had to watch as Polish goalkeeper Wojciech Szczsny deflected a poorly hit penalty kick around the post.

Some people might say that justice was done because the penalty kick was given in a controversial way when Messi went down after Szczsny touched him lightly inside the box.

Messi’s miss right before halftime gave Poland a second chance, but they didn’t take it, and they fell behind almost as soon as the game started again.

Alexis Mac Allister’s first goal for Argentina was a right-footed shot from inside the box. This put Scaloni’s team on top of Group C and in the best position to finish first.

After being put through the ringer in their first two group-stage games, Argentine fans in Stadium 974 and around the world were treated to a relatively easy end to the game.

Julián lvarez, who had come close in the first half, cut inside onto his preferred foot and fired a right-footed shot into the top corner to give Argentina a big lead.

The three points were almost a sure thing for Argentina, so the focus turned to who would join them in qualifying.

Poland spent most of the second half in second place because of how well they followed the rules. They had to wait a long time for the game between Mexico and Saudi Arabia to end.

In the end, it didn’t matter because Salem Aldawsari scored in extra time to get Poland into the next round for the first time since 1986.