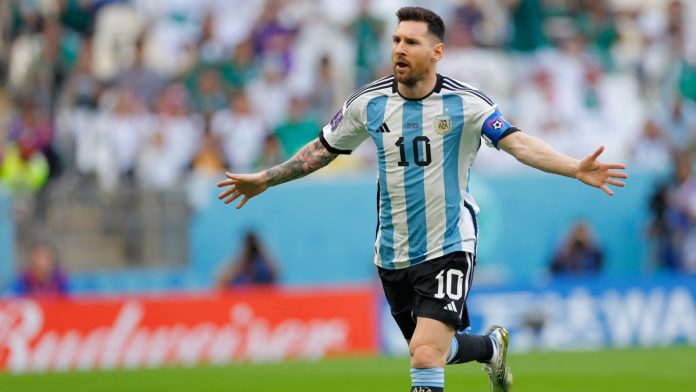 For the second game in a row, Argentina had a hard time getting off to a good start. However, Lionel Messi and Enzo Fernández scored in the second half to give the Albiceleste a comfortable 2-0 win and keep their chances of qualifying alive.

As for Mexico, they have no choice but to try harder after another bad game.

Both teams changed their strategies from the first game and got used to playing in a different way. The first few minutes were close, and neither side was able to take control.

But Mexico’s 3-5-2 formation seemed to have more of an effect, and Lionel Scaloni’s team had trouble making clear chances to score.

Lionel Messi’s inability to make a difference in the final third stood out, especially since he knew it was his last chance to win the biggest trophy of all.

But that didn’t mean that Mexico could get past Argentine goalkeeper Emiliano Martinez, even though Alexis Vega tried a few times.

Even though their fans were yelling for a goal, Gerardo Martino’s team seemed happy to just protect the backline and play out a scoreless draw against a team that Mexico had lost to in all three of their previous World Cup head-to-heads. In fact, Andres Guardado getting hurt a few minutes before the break was the most important thing to happen in the first half.

At first, Argentina didn’t change much about how they played in the second half, and it was clear that they were getting nervous.

But Messi was there to save the day again. He took advantage of a touch outside the box and drilled a 25-meter shot past Guillermo Ochoa, scoring his second goal of the competition and sending the 89,000 fans at the Lusail Iconic Stadium into raptures.

Mexico didn’t want to look like a fool when Messi scored his sixth straight goal in an international game, so they made two quick changes and put Ral Jiménez and Uriel Antuna on the field.

The match ended easily for La Albiceleste, giving them a huge win that puts them in second place behind Saudi Arabia because they scored more goals than Saudi Arabia.

For Mexico to even have a chance of making it to the next round, they must beat the Green Eagles in their next game and hope that Argentina beats Poland.

If anything else happens, El Tri won’t make it out of the group stage for the first time since 1978, when Argentina won their first world title. Gerardo Martino’s team also still has a chance to become the first Mexico team to go scoreless at the finals.