HomeSportMessi and Neymar booed by PSG fans every time they touched the...
Sport 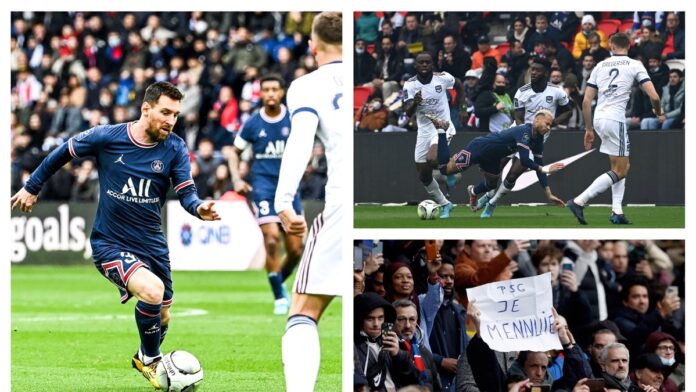 Tension in Paris after the Champions League debacle with some PSG fans calling Neymar “son of a…. whiles whistling at Messi.

PSG fans greeted their team with a loud whistle against Bordeaux, insulting Neymar and whistling at Messi. Mbappe was the only one who wasn’t called names and whistled at.

It was a very complicated morning in Paris. The premature elimination of PSG in the knockout stages of the Champions League had greatly heated the atmosphere on the eve of this afternoon’s match against Girondins de Bordeaux and the reception for the team could not have been more hostile.

Both in the arrival of the players at the Parc des Princes, as well as in the warm-up and throughout the first half, the signs of affection wasn’t given after the teams defeat against Real Madrid.

Mauricio Pochettino’s team landed at the Parc des Princes this morning. In the fan zone where they usually pass, there was a ‘deathly’ silence. Not a show of affection, not a single applause and just a shout of “Come on Neymar” from an apparently Brazilian fan who came to the stadium this morning to try to enjoy the quality of the former Barcelona player.

Subsequently, the silence turned into whistles inside the stadium. When the PSG players left to warm up, the Parisian fans did not stop whistling against everyone, except for Kylian Mbappe, who was the only one applauded by the PSG ultras at the moment in which the stadium’s loudspeaker announced the eleven players selected by Pochettino and that ended up proving them right, since the attacker opened the scoring with a trademark goal.

One of the most notable players was, without a doubt, Neymar. When only two minutes of play had elapsed, the Parc des Princes dedicated strong insults to the Brazilian, who still does not know if he will continue next season in the French capital.

In the 22nd minute, the ‘CUP’, PSG’s ultra group, celebrated a tackle on Neymar as if the team scored a goal, an unusual situation in European football.