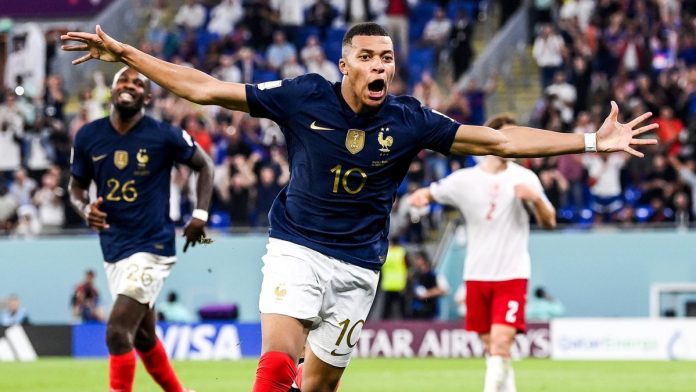 France became the first team to secure a place in the Round of 16 with one game to spare, as they edged Denmark with a narrow 2-1 win at Stadium 974 thanks to a clinical two-goal display by Kylian Mbappé.

The fourth time these two teams played each other at the World Cup, neither team was able to take control of the game. France was pumped up after beating Australia 4-1, so they were a little more outgoing than their northern neighbors and slowly started to upset them.

Minutes after the Danish defender Andreas Christensen broke up a one-on-one chance with a dirty tackle, Adrien Rabiot got up high and made Kasper Schmeichel make a great save to give France their first real chance of the game.

Denmark regained confidence post the half-hour mark, registering their first goal attempt via Andreas Cornelius following a counter-attack, despite the Copenhagen striker hitting the side netting.

Unfazed, Les Bleus continued their charge for the opener, only to see Antoine Griezmann and Mbappé waste the goalscoring opportunities presented to them. Kasper Hjulmand’s men tried to disrupt the rhythm of the reigning world champions as HT approached, but fell short of ideas going forward, eventually ending the half with no shots on target.

After the restart, France didn’t hold back and kept giving the Danes chances. Griezmann and Mbappé both sent their best shots into the stands, but they didn’t have to wait long for the first goal, which was scored by Mbappé on the hour mark.

The PSG star weaved through the left wing and did a great one-two with Theo Hernández. He then surprised Schmeichel by putting the ball between two defenders and into the bottom-right corner, which caught him off guard.

But their happiness didn’t last long. Just a few minutes later, goal-shy Denmark tied the game with a strong header from Christensen that Hugo Lloris couldn’t stop after a corner kick.

End-to-end chances began to unfold as the final minutes dawned, but Denmark were made to pay for Martin Braithwaite’s miss from point-blank range.

Mbappé was important again, and in the 86th minute, the 23-year-old Frenchman finished off a cross from Griezmann to win the game. This put the Danes in a do-or-die situation for their last game against Australia.

The result arrives as a good omen for France, as they’ve gone on to win the World Cup on the previous two occasions they faced and avoided defeat against Denmark.