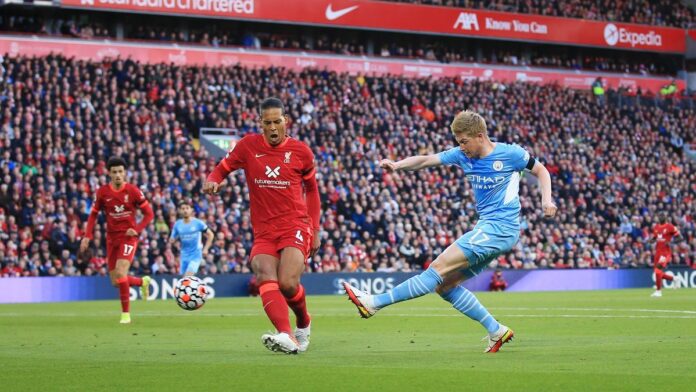 Without doubt the biggest game of the season so far. Manc City’s recent league wobbles have seen their lead at the top of the League closed to just one point.

Back in January, it seemed as though City would run away with the title. But they have dropped points against Southampton. Tottenham and Crystal Palace to slow their pursuit of a sixth Premier League title.

At the start of the year, Liverpool were 12 points off City. The Reds, though, have been exceptional in 2022, picking up 31 points from 33 available, with a 2-2 draw at Chelsea in January the only mark on the record back this year.

Jurgen Klopp’s side come into this huge game on a four-game winning streak on the road, however they haven’t won a league match at the Etihad Stadium since running out 4-1 winners back in 2015.

The Premier League leaders face off twice in the space of the week as they meet at Wembley in the FA Cup over Easter, with Liverpool looking to land the quadruple having earned Carabao Cup success in February.

Neither side will want to lose this one. No less, fans could bear witness to an exciting clash between these two heavyweights in Manchester.

Ruben Dias’ absence is a huge blow for Manchester City, who are also without Cole Palmer for the massive meeting with Liverpool on Sunday afternoon.

Kyle Walker missed the 1-0 win over Atletico Madrid as he served the third and final game of a three-match Champions League ban and his return should see Joao Cancelo return to left-back and Nathan Ake drop out of the side.

Ilkay Gundogan is set to keep his place in midfield alongside Rodri and Kevin De Bruyne, but does face competition from Bernardo Silva in Pep Guardiola’s three-man midfield.

Silva could also start on the frontline, with the Portuguese star, Riyad Mahrez and Raheem Sterling all battling to feature with Phil Foden and Jack Grealish in the final third.

Jurgen Klopp has moved to allay fears that Fabinho fell foul to a serious head injury in Liverpool’s 3-1 win at Benfica.

Klopp could make just one change to the side that started at the Estadio Da Luz on Tuesday night, with Joel Matip returning to partner Virgil van Dijk at the heart of the defence.

That would see Naby Keita start alongside Fabinho and Thiago in the middle of the park, though Jordan Henderson is pushing to replace the former here.

In attack, Klopp has plenty of options, with Roberto Firmino and Diogo Jota both featuring from the bench at Benfica.

However, he should continue with Mohamed Salah and Luis Diaz either side of Sadio Mane.

De Bruyne is hoping to add to his tally of seven goal contributions (G2, A5), while Salah has an inverse contribution record (G5, A2), and will be keen to score for the fourth PL H2H match in a row.

Liverpool are one of two teams in Europe’s top-five league’s yet to trail at half-time this season.

The Reds have been winning at both half time and full time in 8 of their last 10 matches (Premier League).

Liverpool have kept a clean sheet in their last 5 matches (Premier League).

Man City have kept a clean sheet in 5 of their last 7 matches (Premier League).

There have been under 2.5 goals scored in Liverpool’s last 4 games (Premier League).

Man City have scored at least 2 goals in 5 of their last 6 home matches (Premier League).

Liverpool have scored at least 2 goals in 5 of their last 6 matches (Premier League).