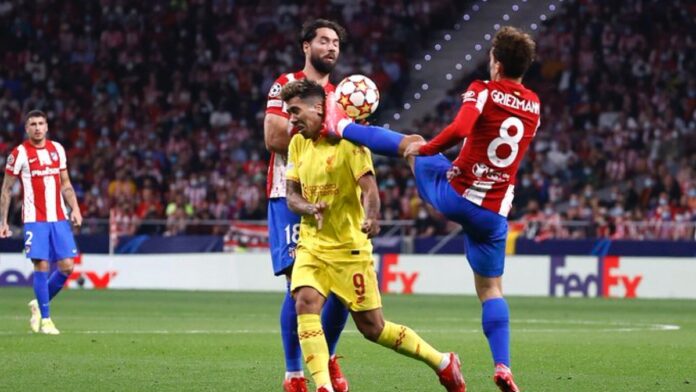 Atlético are known for shutting out their opponents, so conceding two goals in the first 15 minutes of a UCL match for the first time in their history was a surprise.

Mohamed Salah embodied Liverpool’s early dominance as he skipped past three men before striking the ball past Jan Oblak with the help of a deflection.

The second goal was the best of the bunch, as Naby Keta took advantage of a poor clearance and smashed a spectacular volley in from the edge of the box.

With the home side winless in four home UCL matches, it looked like another was on the way, but with Diego Simeone rousing the crowd, they sparked into life and managed to claw it back to 2-2 before halftime.

Both were the result of poor defending by the ‘Reds,’ with Koke being given too much time to get a shot away for the first, which was deflected in by Antoine Griezmann, and the away side’s defense being carved open too easily for Griezmann to get in behind and grab his second.

Both of the ‘Colchoneros’ previous Group B matches featured a red card, albeit for their opponents on both occasions.

It was their turn this time, and Griezmann became the first player in UCL history to score a brace before being sent off for a wild, high boot that caught Roberto Firmino on the side of the head.

The sending off infuriated Atlético, and their frustrations proved to be the home team’s undoing. With just over ten minutes remaining, Mario Hermoso bundled Diogo Jota off the ball in the box, resulting in a penalty kick that Salah converted.

Surprisingly, the ‘Reds’ almost threw away the three points at the death, conceding a penalty at the other end, but VAR intervened and overturned the decision, before Jürgen Klopp’s men used their experience to see out the win and move five points clear at the top of Group B.