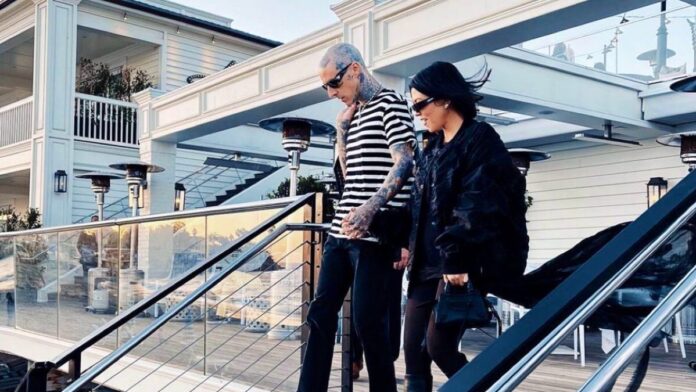 Kourtney Kardashian will walk down the aisle for the first time in her life, and she will do so with none other than Travis Barker, who recently proposed.

The Blink-182 drummer got down on one knee at a beachside hotel in Montecito on Sunday, pulling out all the stops before proposing to her with an engagement ring and asking her to marry him. Of course, she said yes and celebrated with a big smooch.

Some of their friends and family appeared to be present, and Trav laid out an elaborate floral arrangement of roses right on the sand. As you can see, Kourtney was having a good time, hopping up into his arms while a private photographer snapped away.

This is shocking news because, as you may know, the couple only started dating in the beginning of 2021, after being close friends for years. Still, that was quick!

As you’ve seen – and as we’ve documented – TB and KK have been linked at the hip since getting together and going public… and have NOT shied away from PDA, be it on the beach, at Disneyland, on the streets of New York, in Italy – and a plethora of other locations.

BTW, Travis hinted at this recently when he said that “forever” wasn’t long enough for Kourtney. Clearly, he was thinking about his wedding.

Kourtney echoed that sentiment in her own post announcing the news, posting a couple of photos and writing, “forever.”

It’s clear they’re head over heels for each other — and for them to move on to marriage so quickly speaks volumes about how much they love each other especially when you consider Kourtney was with Scott Disick for years — and had several children with him — and still didn’t get married with him, even when he bought her a ring way back when.

She also dated Younes Bendjima for a while a few years ago, but that relationship didn’t last. She appears to be ready to embark on the journey to happily ever after.