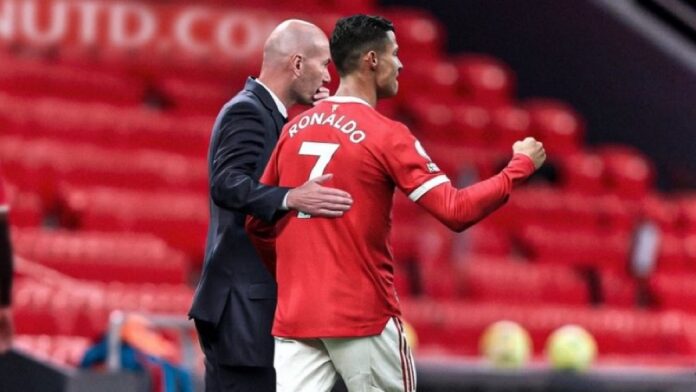 According to El Chiringuito TV,Manchester United has approached former Real Madrid manager Zinedine Zidane on the recommendation of Cristiano Ronaldo.

Following a three-game winless streak in the Premier League, Red Devils manager Ole Gunnar Solskjaer has been under intense scrutiny.

Manchester United have contacted Zidane in case they decide to fire Solskjaer in the near future, according to El Chiringuito TV.

A slew of names have been linked with the job of replacing the Norwegian tactician, with Zinedine Zidane and Antonio Conte being the most prominent.

Zinedine Zidane, on the other hand, would be an ideal candidate if Manchester United want to get the most out of their current squad.

During his time at Real Madrid, the 49-year-old oversaw the likes of Raphael Varane and Cristiano Ronaldo, as well as three consecutive Champions League titles.

The Frenchman was also one of the reasons Paul Pogba was rumored to be interested in a move to Real Madrid.

Ole Gunnar Solskjaer is under increased scrutiny at Old Trafford, with several managerial candidates, including ex-Real Madrid manager Zinedine Zidane, being linked with the job.

There has not been contact between Zidane and Man United according to Fabrizio Romano.

Ole Gunnar Solskjaer is under increased scrutiny at Old Trafford, with several managerial candidates, including ex-Real Madrid manager Zinedine Zidane, being linked with the job.

With the pressure mounting on Ole Gunnar Solskjaer, speculation has already begun to shortlist potential replacements at Old Trafford.

After losing to Leicester on Saturday, United’s manager now faces a crucial week in charge, with Atalanta and rivals Liverpool visiting.

United’s board of directors is thought to have no plans to fire their manager just yet, but if form continues to deteriorate, they may begin to reconsider.

And the fact that former Real Madrid manager Zinedine Zidane is still unemployed will undoubtedly not go unnoticed by the club’s hierarchy.

The Frenchman led Real Madrid to three Champions League titles in his two stints as manager, but he is still taking a break from the game after leaving at the end of last season.

Zidane has not indicated a desire to return to the dugout anytime soon, but a call from United would certainly be appealing given his previous stance on the role.

When Jose Mourinho’s position at Old Trafford looked precarious in 2018, the 49-year-old expressed interest in taking over.

He reportedly told friends at the time that if Mourinho was fired, he wanted to be United’s next manager.

That scenario did occur in December of that year, but United executives chose to appoint Solskjaer as interim manager before appointing him permanently the following March, by which time Zidane had completed his return to the Bernabeu.

Few could argue with United’s decision to stick with Solskjaer after his strong start, though things haven’t gone as smoothly since.

The Top-Paid Football Players in the World in 2021: Cristiano Ronaldo of Manchester United beats Lionel Messi of PSG to reclaim the top spot

The fact that Solskjaer has yet to win a trophy sticks out like a sore thumb, whereas Zidane’s glittering CV is as good as proof of his capabilities for the role as you could hope for.

As a player, Zidane was linked with a move to United, but the allure of Spanish football drew him to Los Blancos, despite his admission that the Red Devils were among Europe’s elite clubs.