HomeSportCristiano Ronaldo had no problems calling himself a ‘GOAT’ after meeting Tom...
Sport 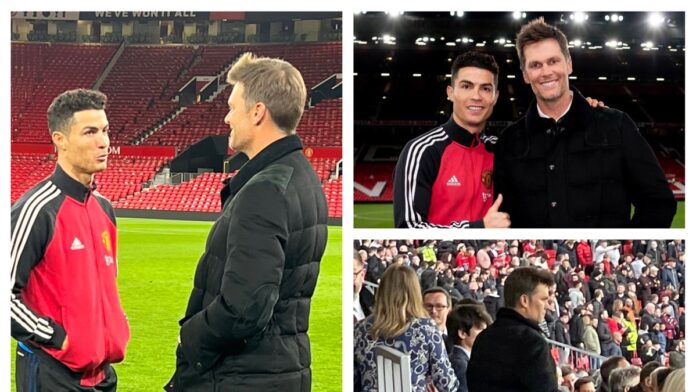 Tom Brady picked the perfect moment to come to Old Trafford to witness a rarity from Cristiano Ronaldo who scored only his second Manchester United hat trick.

Cristiano Ronaldo and Tom Brady had a Goat Conversation after his masterclass/hatrick tonight.

NBC sports commentator Anlo white stated: “That was special. Very special. Witnessing a game winning Ronaldo hat-trick, with Tom Brady looking on at Old Trafford, will live long in the memory. A huge result for Manchester United and a performance for the ages from CR7”

It is legendary when Tom Brady showed up at Old Trafford and Cristiano Ronaldo broke the all time goalscoring record with a hat trick.

Cristiano Ronaldo dos Santos Aveiro has now scored 807 goals across all competitions for club & country, making him the highest goal scorer of all time per FIFA numbers.

With a hat-trick to keep Manchester United’s chances of competing in the Champions League next season alive with a 3-2 win over Tottenham on Saturday, Cristiano Ronaldo set another goalscoring record in a return to form.

Ronaldo had only scored once in his previous ten games, but three spectacular finishes propelled him to the top of FIFA’s list of professional men’s football goal scorers, with 807 goals for club and country.

United moves back into fourth place with the win, although they are only two points ahead of Arsenal, who have four games in hand.