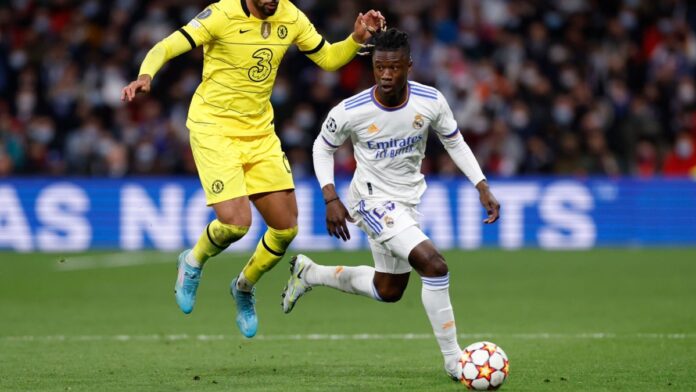 Eduardo Camavinga, a Real Madrid teenager who did not start in either leg, had a significant impact on the tie for ‘Los Blancos’.

After his rapid ascent at Rennes and all the major transfer links to the likes of PSG and Manchester United before eventually joining his dream club Madrid – when he could have made more money elsewhere – many football fans may already be familiar with Camavinga.

The introduction of the Frenchman against Chelsea gave Los Blancos the momentum they needed to make a comeback.

Although the match ended in defeat, the squad was able to minimize the damage in order to fulfill their major goal of reaching the semi-finals.

Real Madrid triumphed once more with Camavinga on the pitch, as they did against PSG. With the score at 0-1 and Kylian Mbappe playing at ease on the Estadio Santiago Bernabéu surface, he came on to replace Toni Kroos in the 57th minute against the Parisians.

His dynamism boosted Madrid’s midfield, complimenting Federico Valverde’s dominance and allowing Luka Modric more room. Because of the genius of Karim Benzema, who scored three goals in the span of 15 minutes, it was a replacement that powered Real Madrid to a comeback.

Chelsea’s predicament was practically a rerun

In the second leg of the quarter-final against Chelsea, the situation was very similar. With Real Madrid losing 2-0, Camavinga was brought on to replace Kroos, and it was Camavinga’s arrival that led to the Blues’ third goal of the game, reversing the 3-1 scoreline from the first leg. The stakes were high at the time.

Camavinga’s presence in midfield proved to be a compliment to Modric and Valverde in this high-pressure situation. Despite the tremendous pressure from Tuchel’s players, Real Madrid were able to win the ball back and play it with confidence thanks to the quality of his left foot.

His tenacity allowed him to collect a ball that didn’t appear to be heading anywhere but ended up in a pass to Vinicius Jr, who scored Madrid’s second goal.

The presence of the former Rennes player helped Real Madrid to go up a notch, just as it did against PSG.

With an intensity that is required in modern game, the Frenchman provided rhythm, vision in his delivery, and a path into the opposition box.

It will only be in the interest of Real Madrid for Camavinga to start the semifinal against Manchester City or Atletico Madrid because his energy will be needed at the tail end of the season.