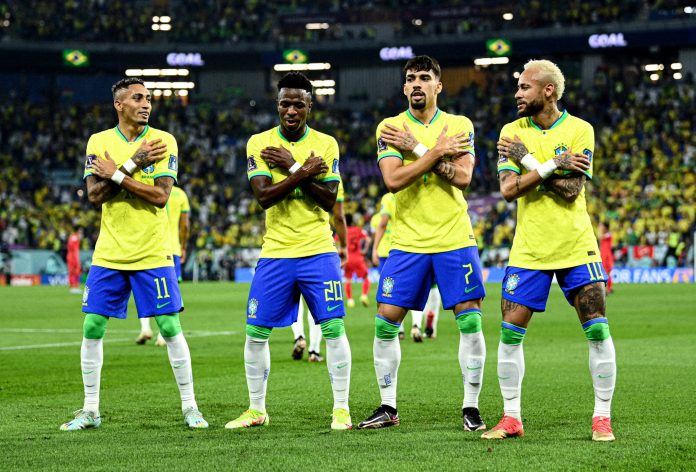 Brazil will play Croatia in the quarterfinals of the FIFA World Cup (WC) after beating South Korea by a score of 4-1. This put an end to the Taegeuk Warriors’ amazing World Cup run.

Neymar’s return to the field gave Brazil a boost, and the Seleção showed off the style for which they are known right away against South Korea.

They didn’t have to wait long to score either. In the first 45 minutes of this World Cup, Vincius Jr. was there to finish Raphinha’s pass and score Brazil’s first goal.

Like in London, where it took a long time to get a bus, Brazil had two in 15 minutes. Richarlison went down in the box after a bad tackle by Jung Woo-young, and the man of the moment, Neymar, stepped up to get close to Pele’s national scoring record.

A quick three-pass move set him up to score, and coach Tite and the whole Brazil bench joined Richarlison in doing his signature “pigeon dance” on the sideline.

South Korea was starting to look bad in the game, and they were in danger of being completely embarrassed when Lucas Paquetá scored Brazil’s fourth goal right before halftime.

This was the first time Brazil had scored four goals in the first half of a World Cup game since 1954.

It might be unfair to say that Brazil answered South Korea’s plea for mercy, but the fact that Paulo Bento’s team made it through the second half without giving up another goal was a small victory in itself.

Tite wasn’t worried about the lack of action in the second half, because he used Brazil’s big lead to pull players out of the game before the quarterfinal on Friday. South Korea’s amazing run comes to an end with this loss.

They can take comfort in the fact that Paik Seung-ho scored a great goal after halftime, but it was never going to be enough to keep them from being eliminated.