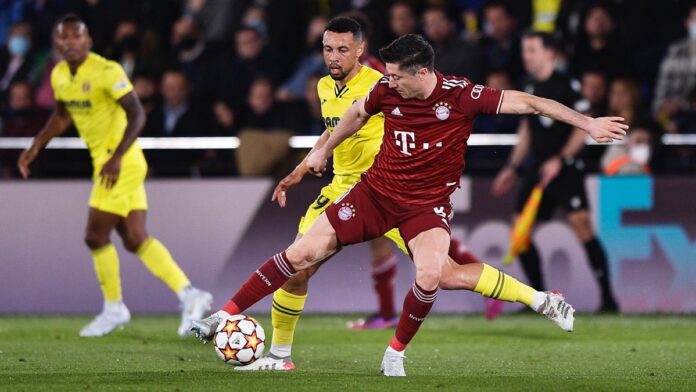 Bayern Munich were unable to make their dominance count in the first leg as they fell to a 1-0 loss in Spain last week.

However, they struggled in the first leg of their last-16 meeting with Salzburg in Austria, before pulverising them at the Allianz. And fans will hope for similar here.

Villarreal may be made to rue their missed chances at El Madrigal.

The La Liga outfit have lost three of their last four on the road, though their sole victory in that run did come at European heavyweights Juventus, so they aren’t to be ruled out here.

With the backing of the Bayern support, the German side should make amends of last week’s defeat and book their semi-final spot.

Bayern’s Robert Lewandowski has remarkably notched 46 competitive goals this campaign, with six of his eight home UCL strikes coming before the 30th minute.

Meanwhile, Villarreal’s Arnaut Danjuma has been involved in 47% of his side’s UCL goals this campaign (G6, A2), and scored the winner in the first-leg.

Alphonso Davies returned to first team duties in the first leg following a spell on the sidelines and he should keep his place at left-back here.

Corentin Tolisso and Eric Choupo-Moting remain sidelined, while Bouna Sarr is a doubt, though the trio were unlikely to have started anyway.

Leon Goretzka started the 1-0 defeat in Spain on the bench, yet should come in for Jamal Musiala on the middle of the park.

Alberto Moreno remains Villarreal’s only confirmed absentee, while Boulaye Dia played no part against Athletic Club at the weekend and will be assessed.

Unai Emery could make one change from the first leg, with Alfonso Pedraza coming in for Francis Coquelin on the left to provide additional protection for Pervis Estupinan.

Pau Torres missed the 1-1 draw with Athletic Club due to a ban, so will be well rested for the second leg.