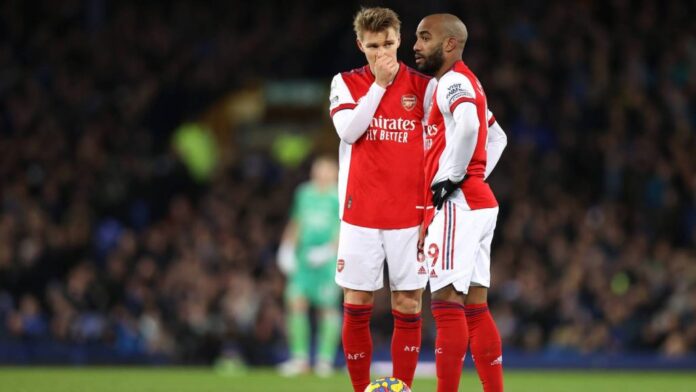 Arsenal’s 2-0 win over Leicester on Sunday saw the Gunners extend their winning run to five matches. And they’ll seek to open up a four-point gap between themselves and their top-four rivals.

That’ll prove easier said than done when they welcome Liverpool to the Emirates.

The Reds have won eight on the trot and are unbeaten in four on the road, winning the last three.

The title contenders have also won their last two trips to Arsenal.

Arsenal will prove a far tougher proposition for Liverpool this time around and while it will be close. The Merseyside giants should eke out the three points.

Thomas Partey has scored two PL match-openers for Arsenal this term, on both occasions heading in corners within the opening 25 minutes.

While Liverpool’s Diogo Jota has netted four goals across the last two H2Hs here, three of them after the 60th minute.

Against Brighton, Liverpool became the second club to score 2,000 PL goals; Arsenal need one more to join them.

Mikel Arteta may elect to continue with the same XI despite a short turnaround between matches here.

Liverpool’s 2-0 win at Brighton could prove costly with Mohamed Salah forced off midway through the second half and the Egyptian will be assessed.

Ibrahima Konate is also a doubt, but the duo are the Reds’ only concerns for their trip to Arsenal.

Thiago may start in place of Naby Keita, but Salah is likely to be fit for Wednesday’s game.

Arsenal have won 9 of their last 11 matches (Premier League).

Liverpool have kept a clean sheet in their last 5 matches against Arsenal in all competitions.

Liverpool have been winning at both half time and full time in 7 of their last 8 matches (Premier League).