HomeSportAnthony Joshua Must Outbox Usyk To Prove He Is Still The Golden...
Sport 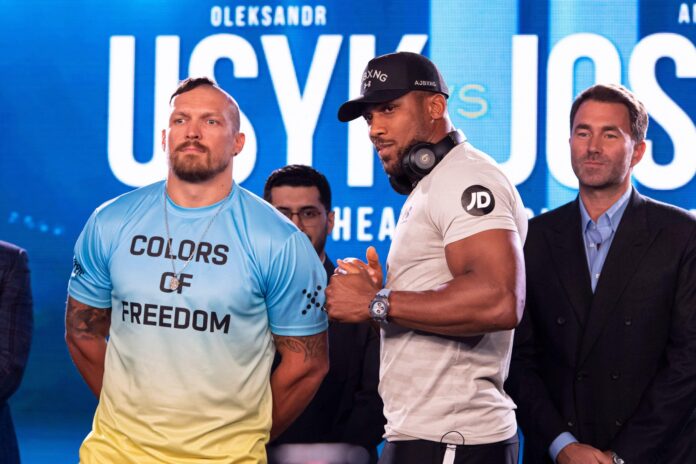 Since his victory in London 2012, Anthony Joshua has spent a decade at the top, but he must now show Oleksandr Usyk that he is still the best.

Anthony Joshua must demonstrate that he still has his allure ten years after being British boxing’s golden kid at London 2012.

Joshua’s reputation was seriously damaged by his loss against Oleksandr Usyk, and in the 11 months since, he has faced inquiries.

He must demonstrate that he has grown after suffering the worst defeat of his career when his strategy of trying to outbox the outstanding Usyk disastrously backfired.

Joshua will be more aggressive on Saturday night in the air-conditioned King Abdullah Sports City Arena.

Joshua gambled by hiring Robert Garcia as his new trainer. Garcia’s guiding principle is intelligent pressure, and he wants Joshua to fight aggressively without exposing himself to Usyk’s outstanding counterpunching.

Joshua faces a Herculean assignment against the Ukrainian two-weight world champion since he needs to defeat someone who hasn’t suffered a loss as an amateur or professional since May 2011.

For the first time in his career, he is the underdog, and this week, the experts have been lining up to dismiss him.

Joshua, 32, is using all of this as motivation and is adamant that he can win despite widespread skepticism. “My heart is in the right place, and my mind is right,” he declared. “I want to challenge myself, to increase my pulse rate, to get my blood pumping, and to throw punches that will hurt my opponent.

“I want to act in the ring in a way that will help me develop self-confidence. Give myself that competitive edge and say, “Yeah, this is working.” That’s where I stand right now. I am confident that if I follow those instructions, I will succeed. And that’s where my thoughts are right now.

Joshua is just concerned with winning and is disregarding everything else that is going on outside of this fight, including his future, reclaiming his belts to become a three-time world champion, or winning the Ring magazine belt.

He is only considering getting his hand raised at the conclusion of the fight, even though he is aware that those other things could serve as a distraction.

That, he explained, was the key. “I am aware of my goals. When I enter the ring, I put pressure on myself by telling myself, “I can become champion again or I can win the Ring magazine belt,” because I don’t want to add any more weight to my back.