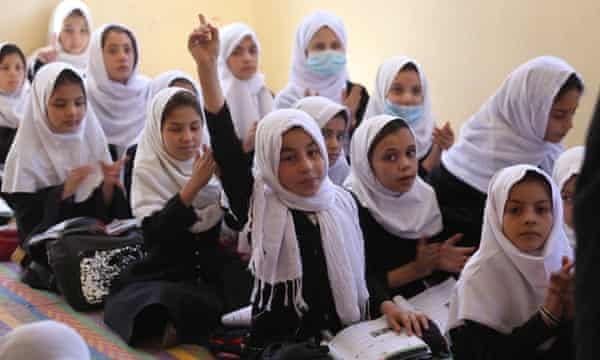 Girls have been excluded from Afghan secondary schools by the Taliban, who have ordered that only boys and male teachers return to the classroom.

The Islamist group’s statement announcing the return of secondary classes made no mention of girls or women.

The Islamist group’s statement announcing the return of secondary classes made no mention of girls or women. One Afghan schoolgirl expressed her devastation to the BBC “Everything appears to be very dark,” she stated

Despite Taliban assurances, this is the latest sign that Afghanistan is reverting to the harsh dictatorship of the 1990s.

Additionally, the Taliban appeared to have closed the women’s affairs ministry on Friday and replaced it with a department that previously enforced strict religious doctrines.

Between 1996 and 2001, the Taliban’s Ministry for the Propagation of Virtue and the Prevention of Vice was in charge of deploying so-called morality police to the streets to enforce the Taliban’s strict interpretation of Islamic religious law, known as Sharia.
‘I am terrified of the future.’

According to a statement released ahead of Saturday’s reopening of Afghan schools, “all male teachers and students should report to their educational institutions.”

Secondary schools typically enroll students between the ages of 13 and 18. The majority of schools are also segregated, which makes it easy for the Taliban to close girls’ schools.
Prospects, according to schoolgirls and their parents, were bleak.

“I am terrified for my future,” an Afghan schoolgirl who aspired to be a lawyer said.
“Everything appears to be very dark. Each day, I awaken and wonder why I am still alive.
Should I remain at home and wait for someone to knock on my door and propose marriage to me? Is this the point of womanhood?”
As her father put it: “My mother was illiterate, and my father bullied her constantly and referred to her as an idiot. I didn’t want my daughter to take on the characteristics of my mother.”

Another student, a 16-year-old from Kabul, described the day as “sorrowful.”
“I desired to be a physician! And that dream is no longer. I doubt they would allow us to return to school. Even if they reopen high schools, they do not want women to obtain an education.”

Earlier this week, the Taliban announced that women would be permitted to attend universities, but not alongside men and would be subject to a new dress code.
According to some, the new rules would effectively exclude women from education because universities lack the resources to offer separate classes.

The number of girls enrolled in primary schools increased from nearly zero to 2.5 million in a decade, while the female literacy rate nearly doubled to 30%. However, the majority of the gains have occurred in urban areas.

“This is a setback for Afghan women and girls’ education,” Nororya Nizhat, a former Education Ministry spokesperson, explained.
“This is reminiscent of the Taliban’s actions in the 1990s. As a result, we now have a generation of illiterate and uneducated women.”

Shortly after seizing power, the Taliban declared that women’s rights would be respected in Afghanistan “within the framework of Islamic law.”