HomeSportAdidas Technology Proves Ronaldo Did Not Score Against Uruguay
Sport 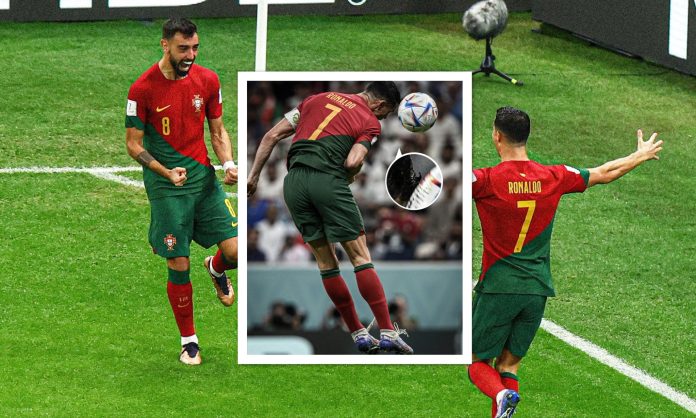 Adidas technology inside the match ball shows that Cristiano Ronaldo did not score the first goal in Portugal’s 2-0 World Cup win over Uruguay.

Ronaldo said he just barely touched Bruno Fernandes’ cross with his head to give Portugal the lead as he jumped up and down, but FIFA later gave the goal to Fernandes.

The Manchester United midfielder, on the other hand, told reporters after the game that he thought Ronaldo touched the ball and scored the goal.

Fernando Santos laughs when asked if he cares who scores for his team after Bruno Fernandes was given a goal against Uruguay after it looked like it went off Cristiano Ronaldo’s head. However, a sensor inside the ball has shown that Ronaldo, who is 37 years old, never touched Fernandes’ cross.

From a statement made by Adidas: “With the help of the Connected Ball Technology in adidas’s Al Rihla Official Match Ball, we can prove that Cristiano Ronaldo did not touch the ball when he scored the game’s first goal.

“No outside force could be measured on the ball, as shown by the lack of a “heartbeat” in the measurements and in the picture that goes with this article.

“The 500Hz IMU sensor inside the ball makes it possible for the analysis to be very accurate.”

Because of what Adidas found, Ronaldo will not be able to score his ninth World Cup goal, which would have tied him with Eusebio for Portugal.