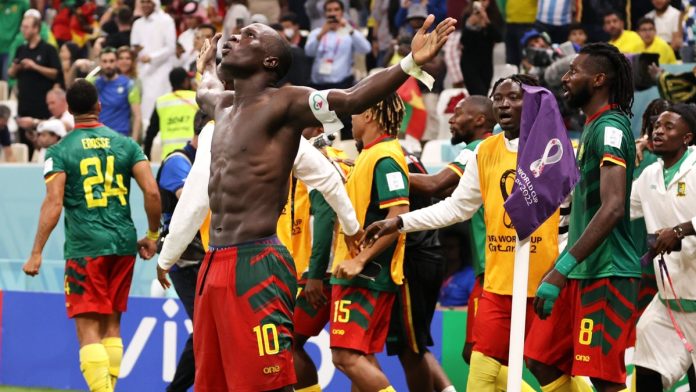 Cameroon beat Brazil 1-0 thanks to a goal by Vincent Aboubakar late in the game. This made them the first African team to beat Brazil at the FIFA World Cup.

Cameroon’s only chance of making it to the knockout stages of the World Cup for the first time in 32 years depended on beating five-time champions Brazil. Brazil made nine changes after qualifying early from the group stage for a record 10th straight time by beating Switzerland 1-0 late in the game.

The Seleco team was made up of different players, but they didn’t waste any time keeping their perfect record in Group G. Fred sent a cross to Gabriel Martinelli, whose header was saved by Devis Epassy after Fred sent it to him.

Cameroon didn’t let the chance stop them from trying to win their last World Cup group stage match for the first time ever, and Ederson had to be on his toes to deflect Nouhou Tolo’s powerful cross.

Even though Cameroon didn’t have much of the ball, they almost took the lead at halftime. Bryan Mbeumo was the first player in Group G to get a shot on goal against Brazil, but Ederson stopped it with his hand.

Cameroon got a boost of confidence from the late chances, and when Aboubakar was brought back, he fired a first-time shot across goal that was just inches wide. But Brazil soon put pressure on after scoring all three of their World Cup goals after halftime, and Epassy pushed Martinelli’s curling shot over the crossbar again.

Both teams had half-chances in the last few minutes, but Cameroon won when Aboubakar headed in a cross from Jerome Mbekeli. However, he was sent off for a second yellow card when he took off his shirt to celebrate.

Cameroon beat a second-string, but still talented, Brazil team, but that wasn’t enough to keep the Indomitable Lions from leaving the World Cup early.

Brazil didn’t pose much of a threat and looked disorganized in their loss, but Tite’s decision to rest key players could help them in the later rounds.